The baseball game field is a right-angled fan-shaped area, and the sides of the right-angled corner are the edges that distinguish the inner-boundary area from the inner-boundary area. The area within the boundary is within the borderline; outside the borderline is the border area. Intra-industry and out-of-bounds areas are areas where competition is effective. Intra-industry areas are divided into infield and outfield. The infield is square, and each corner has a base. The base in the same horizontal plane is the home base, and it is the first base, second base and third base in counterclockwise direction. The area outside the infield is outfield. The venue must be flat and there must be no obstacles.

The back fence should be set at 18.29 meters behind the home base corner. The net height is more than 4 meters and the length is more than 20 meters. Seine fences are set around the site, and a height of 1 meter or more is appropriate.

1. After July 1, 1958, a baseball stadium built by professional pellets should have at least 97.54 meters on both sides of its base line, and the home base must have a distance of at least 121.92 meters between the Chinese and foreign courts.

2. According to the situation in our country, if there is difficulty, the length of both sides can be specified as 91 meters. The distance between the home base and the second field can be set as 108 meters. The home-base to the back fence and the two sides to the wild pass line. The distance can be set at 15 metres. 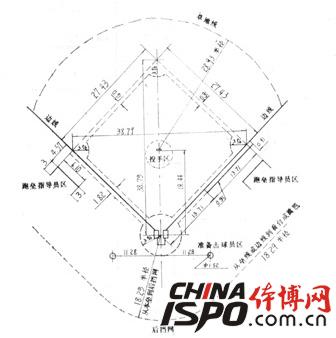 To check if the positions of the bases are in compliance with the regulations, one end of the long rope can be tied to a base of a base, tied to the third base at 54.86 meters, and then pulled to the left and right with a knot of 27.43 meters. Straight, used to check the home and second base position. Now the diagram (Figure 2) is as follows: Step 1: Set A (Home Base) B (Pitcher Front Center) and D (Second Base) Step 2: Set a C1 (First Base) with A Tourmaline Step 3 : Set C2 (third base) again with hyperthyroidism 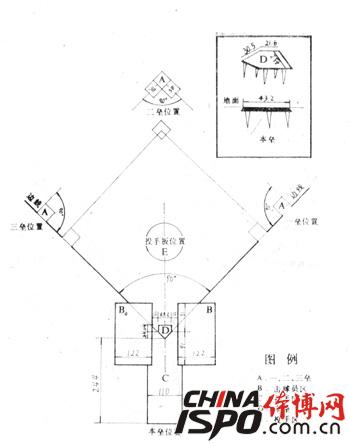 1. Takeover zone: draw a horizontal line 2.44 meters behind the home base corner. The line length is 1.10 meters. The two ends of the line are 0.55 meters away from the home baseline. Then draw a line parallel to the homeland center line from both ends to the home base direction, and connect with the batter zone boundary line. This area is called the takeover zone. (figure 2)

2. The batter area: draw a rectangular batter area on the left and right sides of the home base. The district is 1.82 meters long and 1.22 meters wide. The inner boundary lines adjacent to each other in the two zones are 0.15 meters apart from the edge of the home plate, which is the home plate lateral line. The front and rear sections of the hitter zone are each 0.91 meters long. (figure 2)

Note: The battering area (including the white line marking the area) is an out-of-bounds area, but the ball hitting should be judged as the ball within the bound if it stops in the triangular area formed by the batter area and the sideline (Figure 3).

3. Run-in instructor area: draw a 6.10-meter line parallel to the sideline in the direction of the home base at a distance of 4.57 meters outside the point where the first and second base and the second and third base line intersect with the sideline, and then at both ends of the line. A vertical line of 3 meters in length is drawn outside the field, and the area within the three lines is the running instructor zone. On the base of first base, it is the base of the first basement coach, and on the third base is the base of the third base. (figure 1)

5. The batter preparation area: 11.28 meters on both sides of the homegrown longitudinal centerline at 3.96 meters of home base, and draw a circle with a diameter of 1.52 meters around this home center. This circle is prepared for the batter. Area. (figure 1)

7. Home run line: Take the center of the second base as the center and the distance from the center of the circle to the vertex of the edge as the radius. Draw an arc and intersect the ends of the two sides. This arc is the base line. Judging the home run sign.

8. Grass line: On the turf field, the center of the front edge of the pitcher plate is the center of the circle, and the radius is 28.93 meters. The line drawn by the two lines in the circle is the grass line. The field outside this line is grassland, and land is within. (figure 1)

2. The part of the border passing the batter area should not be drawn. 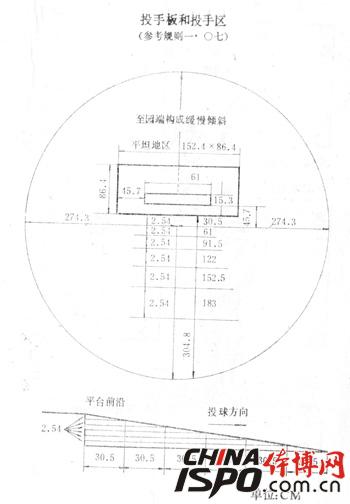 Made of white rubber, pentagonal, (Fig. 2) should be fixed to the ground, flush with the ground. The edges of the home plate sharp corners should overlap with the intersection angles of the outer edges of the first and third base lines. 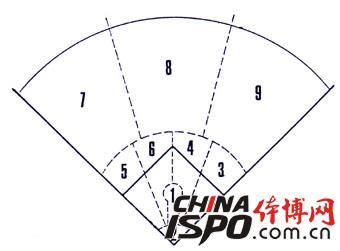 One, two and three bases are 38.10 cm square and 7.6 to 12.7 cm white canvas bags. The first and third bases should be placed on the entire field, and the center of the second base on the intersection of the two bases. The pack contains brown hair and other soft objects. The bag should be nailed to the ground.

The method of setting the bag nails: A relatively simple method is to fix it with a cross canvas belt and a spike with a hook.

Underneath the center of the bag, a hook with a hook (about 30 cm) is used to fasten the hook, and the spike is nailed underground so that the base bag will not move (but it can be turned) when sliding, and the bumps can be avoided at the same time. .

Pitcher board and pitcher area

The pitcher board is made of white rubber. The board is 61 cm long and 15 cm wide. There should be 86.4 cm wide and 152 cm long platforms around the pitcher board. The pitcher board should be flush with the platform. The pitching board and platform shall be placed in the pitching zone within the round mound which is 0.25 meters above the ground and 5.48 meters in diameter (center of circle is 0.46 meters in front of the center of the front edge of the pitching board), and the slope in front of the pitching board shall be forward from the front of the platform 1.83 The meter is lowered by 2.54 centimeters for every 30.5 centimeters ahead, and then gradually inclined to the four bases and flush with it. (Figure 3) Note: The position number of the defensive player on the court, which was first invented by Harry Wright in 1890. The pitcher is the 1st position, the catcher is the 2nd position, the 1st, 2nd and 3rd basemen are 3rd, 4th and 5th respectively, the shortstop is the 6th position, the left outfielder is the 7th position, and the outfielder is the 8th position. The right fielder is at the 9th position.

Finger Toothbrush is directly worn on the hand, its top part has friction material, when used on a finger, because the finger is more flexible, can be brushed to difficult, inconvenient place.
Before using the finger Toothbrush, disinfect the toothbrush and boil it in boiling water for 3~5 minutes. It is not suitable to disinfect the toothpaste for a long time so as not to accelerate the aging.
When using a finger toothbrush, prepare a bowl of warm water (and prepare a special toothpaste), let the baby lie in the arms of the adult, hold the baby's head with one hand, and dip the finger toothbrush on the glove to clean the baby's mouth, brush the head and clean the teeth, clean the tongue, and pay attention to the gap between the teeth. After the use of cleaning, clean and dry the ventilation room to dry.