The readers of this article are those who have a certain foundation in the production of flexible versions of computers, understand the status of the industry, understand commonly used terms, and have higher technical skills in computer knowledge and drawing work.

The carton flexographic printing technology originated in Europe and the United States. Because the printing is lighter, it was called "Kissin". In the early 90s, it began to be used in large quantities in the domestic carton industry. Carton flexo printing has better printing quality and service life than manual or rubber printing, and the speed of plate making and proofing is also very fast. With the expansion of the plate making market, the plate price of professional plate making companies has steadily decreased, from 0 in 1997. From 8 yuan/cm2 to now 0.2~0.4 yuan/cm2. The popularity of flexographic printing has also been greatly accelerated. Most carton companies have begun to use flexographic printing in their production to improve the quality of carton printing.

The key part of the production of flexible version is to ensure the quality of computer processing and film, high-quality film film is the basis of high-quality flexible version. With the development of computer technology, people can now implement graphics processing previously completed by Apple machines or workstations on relatively inexpensive PCs. The author's former company only bought an Apple machine in 1996 (at the time, the price was as high as 60,000 yuan). The graphic processing of the newly built factory was completely replaced by a high-speed PC, and the price was only around 10,000 yuan. PC's support software is more abundant, and the production equipment needs are also relatively simple. Only ordinary scanners and printers that support PS language (which can simulate the effect of hanging nets) can be used.

The key to prototyping is to have cartographers who will use a variety of software. At present, most domestic plate-making companies use Adobe's graphics software. Its feature is that it is cross-platform. No matter whether it is a PC or an Apple, it can find the same version of the software. No format conversion is required. The production staff commonly used CorelDraw, PageMaker, Illustrator, Freehand, Photoshop, etc. can complete most of the graphics correction, path outline, imposition proofing output and other working software. Existing foreign-funded enterprises or joint ventures have introduced some more scientific and advanced specialized publishing software, such as QuarkXPress, Israel's advanced angels and other software packages. These professional typesetting software includes functions such as making basic graphics, imprinting ink drafts, and artistic processing. Because of the peculiarities of the carton industry, using Illustrator and Photoshop can complete all the production work: Photoshop as pixel graphics software, the image correction and take the path. Illustrator is vector graphics editing software for word processing and imposition. Illustrator processing is characterized by no change in the quality of the image when zoomed in and out. This article uses these two kinds of software as an example to introduce the entire production process. 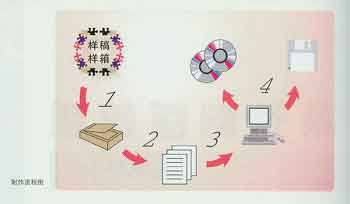 1. After obtaining sample boxes or ink drafts from business personnel or other sources, the first step of the art production staff is to cut the sample boxes into sizes and sizes according to the size of the scanner and ensure that the scanners can It is better to scan the whole block completely. If the experienced production staff, generally cut the number of the classification of the block, the classification method is to divide the graphics into one category (Note: the original text but the computer font does not have fonts or artistic words also need to be treated as images), Text is divided into one category. Then use Photoshop software to scan the document into the computer and perform preliminary processing on the blurred parts of the document. Because the printing of carton companies is not like the color printing industry, scans are only required to scan by line type. The resolution is generally selected at 150dpi. In this way, it can be ensured that a smaller scanned graphic file is generated and the processing speed is increased. The scanned graphics file is saved according to the cut number, and the graphic file is in compressed ipeg format or tif format.

2. After the scan is complete, enable the Photoshop graphics software again, and process the previously scanned graphic files by number (the text file will not be processed). After opening the graphics file, first confirm the integrity of the graphics. Because the original carton originals are relatively rough, it is necessary to repair the graphics scanned into the computer, such as rounding out the non-circular circles (note: some special characters must also be treated as graphics). The text type data does not need to be processed, and it is directly transferred to the next stage. The graphic data needs to be dealt with in this stage. The key to processing graphic data is to draw out the border of the graphic. When dealing with the border of a graphic, pay attention to magnify the graphic as much as possible, and use a pen-shaped tool to outline the path of the graphic to form a closed graphic, which is commonly used in Photoshop; use the â€œpathâ€ in the tool bar after exporting the path. "Functions are individually documented in AI (Adobe Illustrator), which completes the graphics processing phase.

3. Start Illustrator, create a new document, and set the document edit size to the size of the carton or sample 1:1. According to the situation of the sample draft, six regions (generally drawing virtual boxes to simulate) are generally required, which correspond to the four box surfaces and the two upper flap surfaces of the sample draft respectively. After the document is set up, the control box is produced separately for each area. The first step is to import the exported AI file in Photoshop. The imported AI file is invisible. You have to fill the color block or carry out the net processing according to the actual state of the carton (more popular in previous years). Hanging nets is a technique for decomposing continuous tone tones, decomposing the different light and dark levels on the continuous tone image into dot areas of different densities. Dots can have a variety of shapes hanging points (usually controlled at 30 to 50 lines, otherwise the printer is difficult to express), direction, size, type should match the printing machine's anilox roller to produce the best printing effect.

When using Illustrator for word processing, import the image file just scanned and cut, use the scanned text, graphic text as the bottom panel, use the text tool to make the same text input on the diagram, and then use font matching and size changes (Illustrator font change function is extremely powerful, you can customize the length and width, and even the font line width and line type, etc.), or after effects processing to achieve the same state with the floor graphics.

4. After the production is completed, please save a prepared file for the completed six pages. Generally, we add the font name to the file, and then convert all the fonts of each page into curves or paths. It can guarantee that the font is perfectly safe when it comes out of the film, because some fonts will miss the word when it comes out. Then you can see the actual film effect on the screen. (Note: If the font is converted to a path or curve, there may be aliasing, such as bold, on the screen, but it does not affect the output; it is worth noting that most PC fonts currently use TrueType fonts. After the curve, zooming in on the stroke will cause slight distortion, but most Macs use Postscript fonts, and this phenomenon does not exist, so when making on a PC, it is best to choose PC and Apple. The type of fonts, such as the WordPad fonts, etc., were converted to curves when they were finally released, and sometimes they were free of many annoyances.

Now the average customer needs to review or amend the ink draft. Therefore, how to present the data to the customer is also an important issue. The customer generally requests to provide 1:1 ink and electronic files. There is no better way to make ink, but it can be tricky. Only the graphics can be output in chunks of the printer's printable size, and the artists can send them to each other. Now the artwork is printed on a whiteboard. Adhere to the orientation, after the completion of a piece of paper covered with sulfuric acid, and then install a cover and write the manuscript content, production staff and other information, I feel very professional and beautiful. In the production of electronic files, it is now generally a matter of outputting a prepared file as a standard file that can be circulated on any operating platform or in any languageâ€”a PDF file. This kind of file can be used regardless of the operating system, nor can we pick the language in which the system is installed, and it can be viewed and printed according to the style we have on the local computer. The precautions for outputting such a file can be set and selected in the "Publish PDF File" function item in the "File" menu. The Illustrator electronic file is generally not given to the customer unless the customer specifically states otherwise.