As plastic materials have grown in applications in the automotive, electronics and communications industries, plastic coatings have also developed rapidly in recent years.

Because the cured system has a highly cross-linked structure and has good physical and mechanical properties, UV coating technology has been increasingly applied in wood, furniture, construction, printing, and electronics to provide coatings with good properties. , protect the substrate. However, the use of UV coatings on plastics is generally relatively limited.

At present, UV coatings in plastic coatings are mainly used in mobile phones, computers, MP3 players, cameras, household appliances, and cosmetics packaging. In Asia, the demand for coatings in these applications has reached approximately 16,000 tons/year and is increasing at a rate of 15-20% annually. In the Asian context, Japan still dominates the market for UV plastic coatings. China subsequently became the second largest market for applications. However, currently imported paint products still dominate the Chinese market, and Chinese domestic paint manufacturers are actively using them. The resources provided by various raw material suppliers and equipment suppliers independently develop coating systems with their own characteristics. South Korea has developed a very successful coating system in the field of cosmetic packaging vacuum coating.

The purpose of this paper is to present some typical problems encountered by paint manufacturers in the development of coating processes and to combine these practical issues with the performance testing of some new resin products. Some common methods for evaluating the mechanical properties of paint films
Pencil hardness
Because pencil hardness is simple and convenient, this method is most often used for testing. The pencils used for the test included from the hardest 9H to the softest 9B, H for hard, B for black, and HB for hard and black pencils. The hardest is 9H, followed by 8H, 7H, 6H, 5H, 4H, 3H, 2H and H. F means medium hardness; then HB, B, 2B, 3B, 4B, 5B, 6B, 7B, 8B, 9B are the softest pencils.

When two different topcoats are applied on the same system, either directly on the substrate or on the primer, pencil hardness can be used as a measure of hardness of the paint film. However, the measurement result of pencil hardness is not absolute, and the part underneath the paint will also affect the final test result. If the same paint is applied to different substrates, the displayed hardness will be very different, so Pencil hardness testing should be done under the same conditions, such as the same substrate and film thickness.

RCA detection
The RCA (Coating Abrasion Resistance) test is a softer wear test method (compared to a wear test method for wood floors or PVC pinch boards). The detection principle is to pass an own weight through a rubber wheel to a tape that touches the measured object through an object with a specific weight (usually 175g). Finally, the measured object is tested for abrasion by the tape. The result of the test is represented by the number of turns that have accumulated through the paper bag as it wears through the primer. Because the primer or the substrate often has a color, it is easy to distinguish directly with the eyes.

The RCA abrasion test method is also very sensitive to the thickness of the paint film, so both paints must be compared under the same conditions.

For mobile phone paint, RCA wear requirements are generally between 300-500 rpm, and some high-demand manufacturers will reach 1,000 rpm.

In China's mobile phone paint market, RCA testing is a must, and sometimes it will cooperate with the application of some other detection methods. The most commonly used in other Asian countries is the TABER abrasion test. RCA tester for abrasion resistance testing of plastic coatings
Taber wear test
Taber Abraser Tester consists of a horizontal test plate for holding objects and two abrasion wheels. During the test, the horizontal test plate rotates at a constant rotation speed, and the abrasion detection is performed on the measured object by two abrasion wheels. Due to the constant speed and weight, the wear wheel can maintain a constant wear test on the object under test. The usual wear wheel is the CS 10F model with a weight of 1000 g.

Steel ball detection
This is a quick detection method by observing the change of the surface by using a steel wire ball to wipe the object under test with a constant force and speed.

Other internal detection methods
Every mobile phone manufacturer may have some self-developed testing standards. For example, some manufacturers may use rubber to paint the surface of the paint film to characterize the strength of the paint film, but all these test methods are to try to imitate the actual application. External conditions at the time, thus evaluating the performance of the paint. Flexibility and brittleness
The simple test of flexibility and brittleness is to bend the coated sample plate and observe the surface for cracks.

Other key requirements
Adhesion
Obtaining good adhesion on various substrates or primers is indeed a very big challenge for coating manufacturers. Coating developers always hope to develop a common plastic substrate such as ABS, PC, BMC or Polyolefins and various primers (thermoplastic primers or two-component PU primers) have good adhesion on the coating products. According to our experimental results, various aluminum primers require particularly high adhesion. Adhesion testing is generally based on the ISO 2409 standard, which is the cross-cut method, which means that it can pass through without lacquer. The adhesion test is generally performed after UV curing, or after UV curing, a series of durability tests such as moisture resistance and heat resistance are performed. In addition, whether or not the surface of the paint film is observed after the endurance test is performed on the articles is observed. Crimping or other changes can also reflect the good or bad adhesion from another side. Of course, the solvent in the spray formula also has a great influence on the adhesion.

- The color of the coating system itself: the color change can be measured with a colorimeter before and after coating, usually expressed in Labvalues. Since in the production process of the resin, antioxidants, stabilizers, and catalysts all have a great influence on the color of the final product, reducing the color of the resin itself is an important issue for future resin manufacturers. Focus.

- Changes in color over long periods of time or after exposure to light: commonly referred to as non-yellowing or outdoor durability. This is mainly due to the fact that the resin itself has some structures that are unstable to light, resulting in changes in color upon exposure to light. In general, resins containing aromatic ring structures should be avoided, and aliphatic urethane acrylates perform very well in this area. In addition, careful selection of photoinitiators is also required.
- In the case of metallic primers, some darkenings are caused by monomers in the formulation such as HDDA, TPGDA or TMPTA causing bite on the primer, so in order to obtain a good final result, the current trend is to develop not Monomer-containing prepolymers. In addition, the solvents in the formulation can also attack the primer and should also be considered in this regard. Surface condition
Spraying to obtain a good surface effect requires a lot of adjustment techniques. Formulation and paint users need to deal with many surface defects such as: orange peel, fish eyes, and holes. Solving all these problems requires very fine adjustments to the coating system, such as adjusting the volatilization rate of the solvent system during spraying, not too fast to achieve a good leveling, but not too slow to prevent the solvent before the photocuring Incomplete volatilization caused the residue to affect the film performance.

For the current plastic topcoats, physical drying and cross-link curing are two completely different stages. In the first stage, the flash drying of the solvent is usually performed at 60 to 80 degrees, and in the second stage, the coating itself is cross-linked and cured at a relatively low temperature. Therefore, the surface condition of the paint in the first stage will remain until the photocured, which means that in the second stage it is impossible to remove the surface defects generated in the first stage.

The common surface imperfections in UV coatings, such as the pitting problem, can be solved to a maximum extent by using oligomers 1, 2, 3 and a satisfactory level of solvent can be obtained by selecting a suitable solvent combination.

In summary, it is necessary to develop resin products with good sprayability, leveling, and surface defects to facilitate the formulation development.

Conclusion: Hard coatings for plastic surfaces are high-performance coatings that require a comprehensive balance of color, hardness, abrasion resistance, flexibility, and adhesion. In addition, the final application method is spraying and must achieve good leveling. Gloss and other surface effects.

Reprinted from: Coatings and Inks

Oak wood has an open, wide grain that allows for even finishes and stains.


JUNHUA FURNITURE is a well established manufacture and exporter, dedicated to providing quality furnituring, ranging from hotel furniture, home furniture, and shopping malls showcase, etc, mainly in Solid oak, ash, beech walnut, and pine product as well as veneering product. With over 20years of manufacturing experience and advanced equipments from Germany, we produce a large number of wooden furniture, and the products have been exported to The USA, Canada, the UK, Spanish, Australia, japan, korea, south Africa  etc., and gain a great favor. 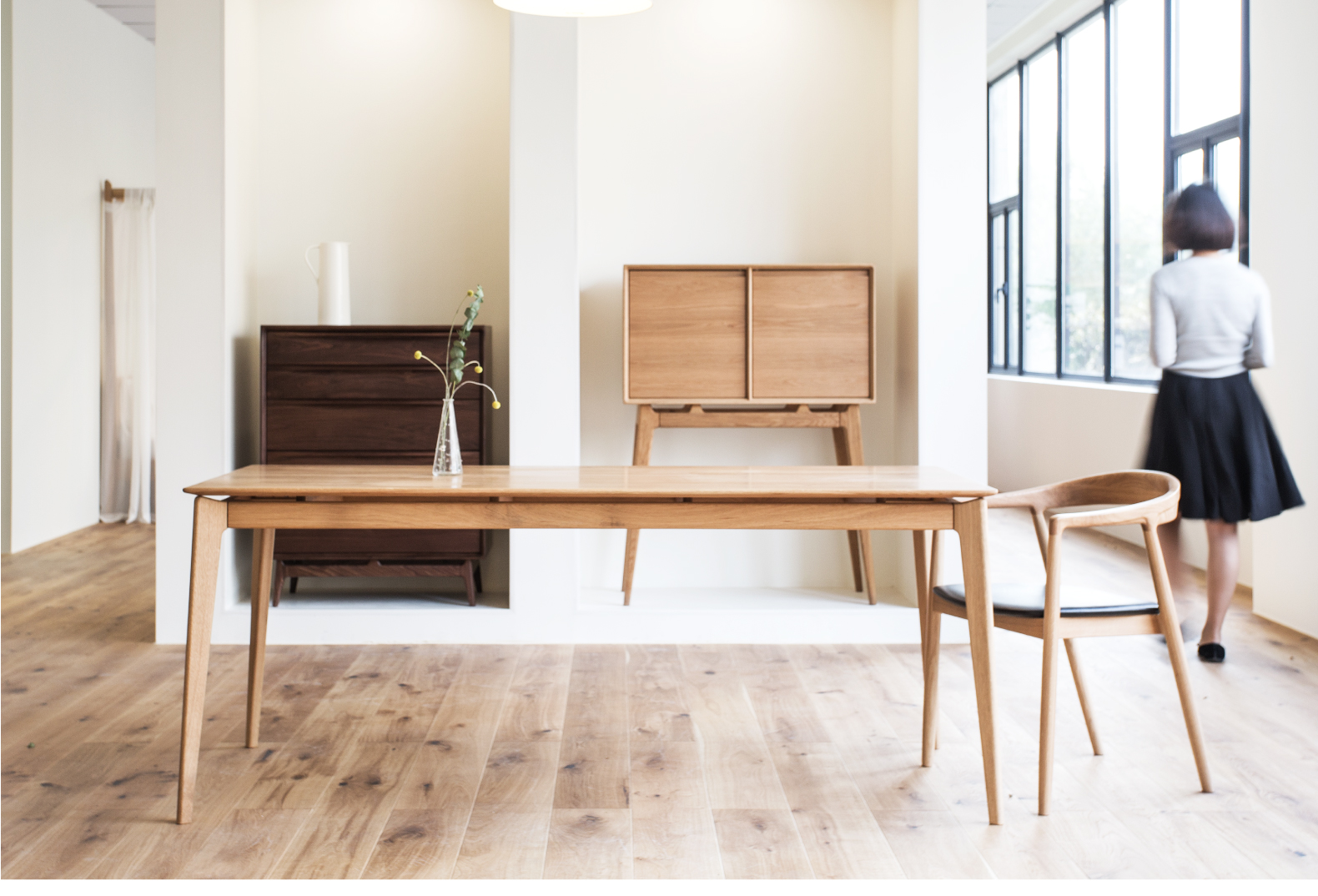